Why is it that oriental carpets possess such an air of mystery and magic? In Aladdin they fly. In other tales of folklore they can be a gateway to the afterlife or an earthly manifestation of Paradise. To understand this we have to understand the role and status of carpets in pre-modern Middle Eastern society. Great effort, time and cost went into making a carpet—it holds true even today. In the pre-Industrial Age, however, these factors were amplified. Possessing a rug was having an object of tremendous cultural and material value.
Two particular genres of carpets stood out: prayer rugs and palace carpets. Prayer rugs were among the very few personal possessions of the chosen members of Sufi brotherhoods, wandering mystics who travelled near and far to study the world and preach their outlook. The fact that they had precious few material possessions lent those they did own—carpets foremost among them—substantial importance. Sufi prayer rugs were usually made of camel hair, a fiber in itself symbolic, and thus these objects came to acquire significant socio- religious value. An angular mehrab niche would crown the upper field of these carpets, an arch lifted from Islamic architecture that denoted the direction of prayer, or Qibla, towards Mecca. The mehrab on carpets acted as an arrow pointing in the direction of the realm of the Divine and, by extension, the possibility of salvation and immortality of the soul. Little wonder that magic and flying capabilities were then given to these humble objects!

At the other extreme of these self same societies we have the rich, ornate carpets commissioned by the leading artists of the day to decorate the palaces of Sultans, Emirs and Shahs. The most ubiquitous theme they shared, whether woven in Istanbul, Esfahan, Samarkand or Agra, was their quest to depict a heavenly garden—Paradise—on earth. This tradition of Garden Carpets goes back all the way to the Sassanid Dynasty that predates Islam. We see flowing water channels depicting the four rivers of water, wine, milk and honey described in the Quran. Lush vegetation abounds, with bounteous trees bearing fruits of all sorts. The magnificence of these masterpieces, today found in leading museums all around the world, left an imprint on the collective consciousness of carpet aficionados for centuries and they became an ideal to aspire to. The best way to praise a handmade carpet has become to claim that it is “fit for the Shah’s palace!” The fact that legendary rulers like Shah Abbas (1587 - 1629) was a carpet weaver himself only adds to the mystique, as does the knowledge that for long centuries carpets were the gift of choice between monarchs and rulers. Jahangir of India gifted Shah Abbas a pashmina carpet and the latter presented Murad III of Turkey a remarkably fine silk carpet in turn. These objects and events are well documented. When it comes to discussing the other 90% of carpets that survive, objects that belonged neither to kings nor to saints, we are faced with a cornucopia of mysterious motifs and secret symbols. They all had meanings when they were originally created or copied from the natural world or an artist’s imagination.

Many of them retain their clarity of depiction and their clear-cut symbolism while others’ meaning has been lost amidst the fogs of time. A majority of motifs on Oriental carpets are mere decorative ornament, generally in the case of flowers and most animals. Some however have particular meaning. Trees are all symbols of fertility and growth but the real Tree of Life is always a cypress. The weeping willow or bid majnun symbolizes sadness and nostalgia, a sense of waste and tragedy as in the romance of Layla & Majnun. Some motifs are straightforward in their symbolism: a crown for royalty or allegiance to the Shah, the comb on Caucasian prayer rugs standing for cleanliness, the peacock for fertility and prosperity in Persian village rugs, the ibriq ewer on Anatolian prayer rugs symbolizing ritual purity … A lion also stands for royalty and leadership in the ancient Persian tradition. Yet in the lion rug gabbehs of southern Iran they have an additional meaning. Tradition has it that when a girl’s hand in marriage is asked for among the nomadic Qashqai, she goes off to weave a lion rug while she considers the identity and character of her suitor. A few weeks later, the gabbeh is washed in the nearest river and hung to dry where members of the tribe may see it. If the lion’s tail is raised then that is a yes, whereas if it is lowered then the request has been denied—so endlessly endearing and captivatingly charming! 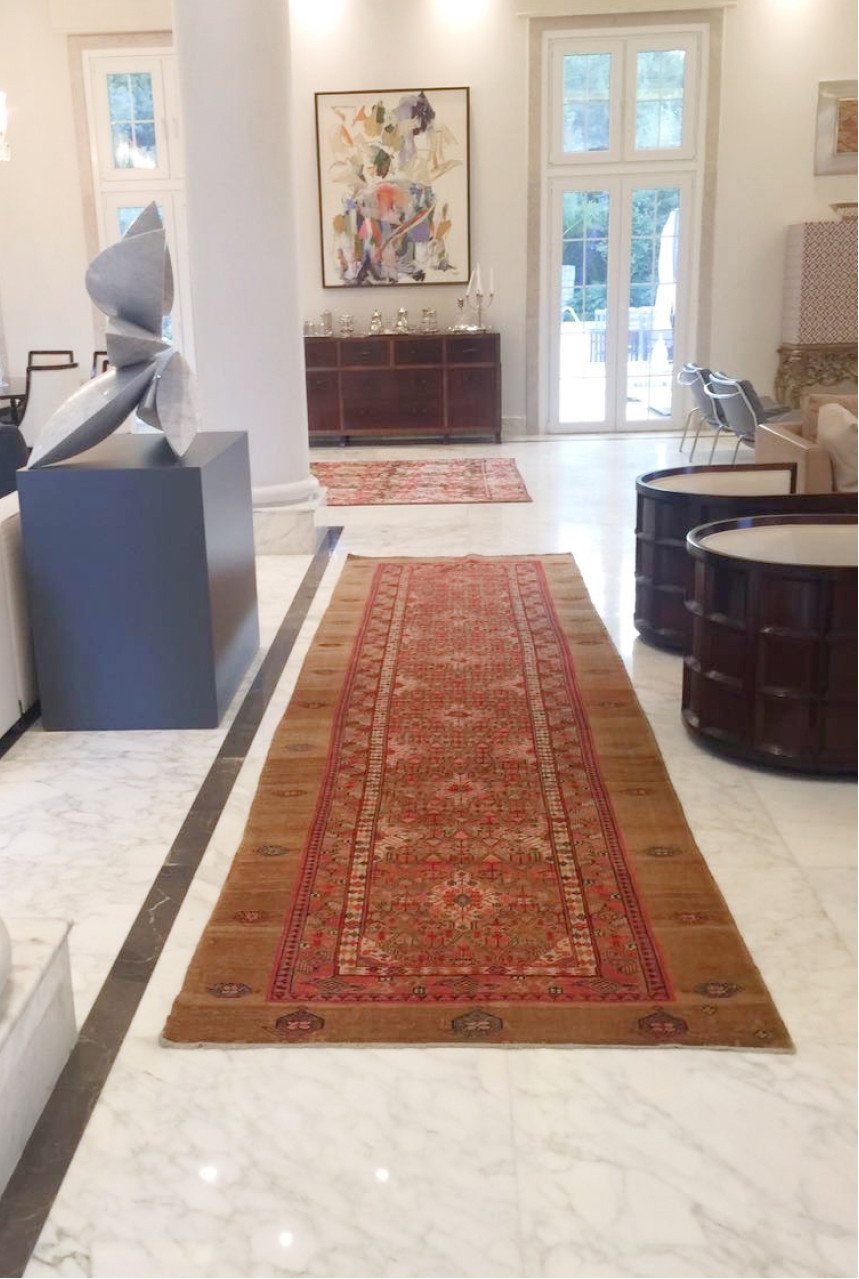 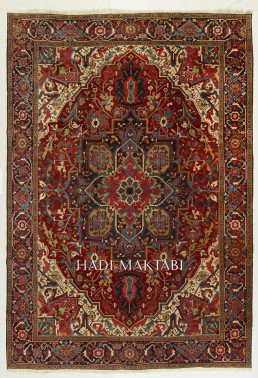 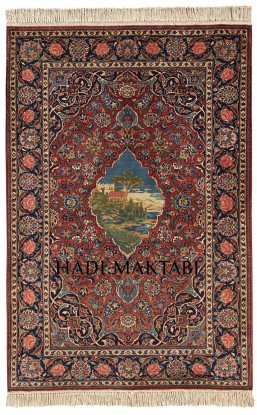 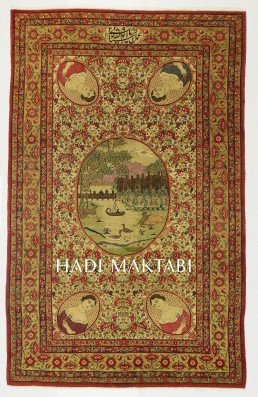 To me personally there is no surprise, event or frankly anything that gets me more excited than the purchase of a treasured piece of understated artwork such as that of a proper vintage/antique carpet. The sourcing, grading and authentication of these pieces is no small task but is of the highest importance. Through the respected dealer Hadi Maktabi all that is guaranteed, and rest assured the one thing I can guarantee personally as a client is a first class service from the initial selection process till it gets delivered right to your door step. It was an undeniably special experience, with hundreds of carpets to choose from, will definitely be visiting again. Thank you dear Hadi. Habeeb Al Monawer, Kuwait 🇰🇼

I have been buying and collecting oriental rugs for over 40 years. As a result I have had direct experiences with many dealers and galleries throughout Europe, North America, the Middle East and Asia. The Hadi Maktabi establishment is distinct and unique. It is rare to find a dealer who not only has a discerning taste and excellent choice of rugs. But with Hadi, the experience is one of an erudite oriental rug scholar paired with years of family experiences and traditions dealing in rugs, carpets and textiles. The available choices, diversity and quality of his stock is awesome. It is always a pleasure. Highly recommended and satisfying. As a collector he has become not only a partner of choice, knowledge and information but also a valued friend. Robert Bell, CEO Royal Brompton & Harefield NHS Foundation Trust, U.K. 🇬🇧

Hadi Maktabi and his staff provide comprehensive and thoughtful services to collectors and textile buyers worldwide. His knowledge of antique oriental rugs and textiles, including many fine offerings from the Levant, is unsurpassed. We have been loyal customers for over five years and have visited his Beirut premises. He has worked with us upon several occasions to select the exact Ottoman and Levantine pieces we wanted for our collection. You can be sure of quality and honesty when dealing with Hadi. Penelope and Timothy Hays, Just In From The East Collection, Florida 🇺🇸