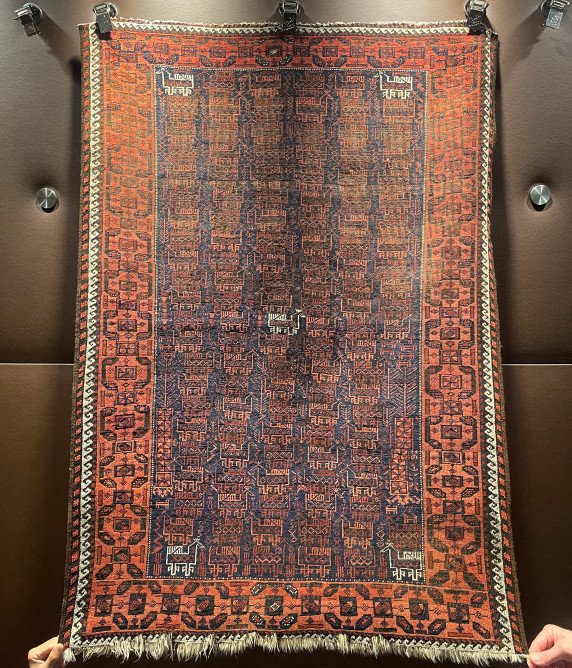 Took me 2 long years to acquire it. And it turned out to be far more important than I dared imagine. Check this out 👇 and brace yourselves for a ride of literally Biblical proportions, mathematical ingenuity, and primal tribal power.

The mystery weaver drew 125 peacocks. I doubt any other rug has a higher number. 5 stand out in glaring white forming a clear cross shape ie ❌ marks the spot. The cruciform symbolism needs no explaining. That leaves 120 birds in alternating shades of saturated red.

The numeral 5 has profound symbolism in Islam beyond the pentagram: the five prayers, the five pillars, the five holy members of the Prophet Mohammad’s household, 🖐 etc.

Mathematically 120 = 5! = 5 x 4 x 3 x 2 x 1. This is called 5-factorial and brilliantly links the number of white birds to that of the dark ones. 120 is a number imbued with significant numerical and numerological symbolism. It forms the ancient “long hundred” of Germanic & Anglo-Saxon society (look it up).

It is 12 x 10, a combo of the two most widespread modular bases. Our current arithmetic scheme is base 10 (fingers, toes, currency, counting sheep..). The ancient Babylonian one was base 12, hence 12 hours and 12 months and 360 degrees in a circle etc. Of course 12 also refers to the Shi’a Imams, the Apostles of Christ, the Israelite Tribes, the constellations of the zodiac, days of Christmas, and so endlessly on.

120 is also associated with ancient Zoroastrian & Hebrew traditions. Said to be the age of Moses at time of death, “120 years” is used by both Persians and Jews today as a really incredible age to live to. “Once in 120 years” is equivalent in Persian culture to “once in a blue moon” in English. It’s said that the ancient Achaemenids would hold festivities every 120 years and no living human would ever witness two, hence the saying.

I think I’ll stop here.
Just forget all the above now and behold how truly beautiful this Baluch rug really is. Regardless of everything. But how infinitely more sublime it is when considering everything.

Yes I Want This 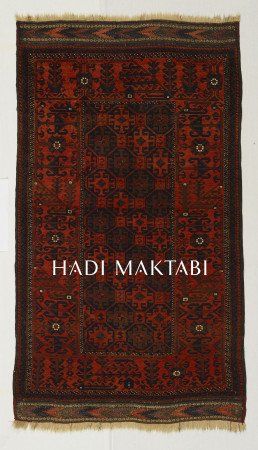 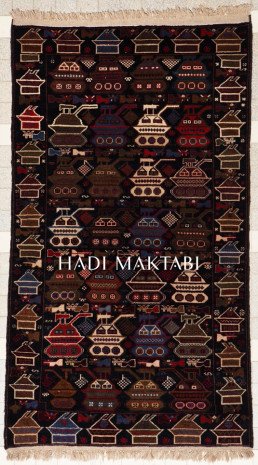 Hadi Maktabi and his staff provide comprehensive and thoughtful services to collectors and textile buyers worldwide. His knowledge of antique oriental rugs and textiles, including many fine offerings from the Levant, is unsurpassed. We have been loyal customers for over five years and have visited his Beirut premises. He has worked with us upon several occasions to select the exact Ottoman and Levantine pieces we wanted for our collection. You can be sure of quality and honesty when dealing with Hadi. Penelope and Timothy Hays, Just In From The East Collection, Florida 🇺🇸

As a carpet collector of 30 years, I have noticed a decline in the amount of truly unique and high quality carpets on the market. I have also noted a decline in the knowledge of merchants, generally. Hadi Maktabi stands against this trend as a both a curator for and an educator of his clients. His offerings are well-researched, museum quality carpets that are both singular and expertly chosen. In dealing with Hadi, I have experienced excellent communication, a high standard of service and extremely pleasant interactions. Warren D., Hong Kong 🇭🇰

Acquiring a piece from my dear friend Hadi is truly a journey. We start that journey with a lesson and detailed background on any piece that is of interest. After a thorough discussion regarding the chosen piece or should I say marvel, since Hadi's pieces are truly marvels, Hadi guides us into why he would advise us to acquire it or go for another of his marvels that would suit us more than the one initially chosen. This sincere advice always makes us feel that we are generously taken care of by Hadi. The learning process and honesty in guidance make us go back only to Hadi whenever we are looking for our next beautiful piece for our homes. All I can say is thank you Hadi for your impeccable guidance and service. Abdullah Al-Awadhi, Kuwait 🇰🇼